Some books go straight to your heart and inspire you to work harder, try harder.

Lisa Hill’s Reviews from Indigenous Literature Week at wordpress ANZ Litlovers 2016 | ANZ LitLovers LitBlog made me think about the book that gave me the confidence to embrace creative writing. It was Sally Morgan’s My Place;  the story of being part of an Aboriginal family who, due to the shame attached to being aboriginal in Australia, ensured that Sally grew up believing the family came from India.

My ancestry was German, but until I was in my twenties I believed our family came from Belgium. When my father  died I couldn’t sleep. Every night was spent sitting at my computer trying to recapture in words so many of the stories he had told me (after he turned eighty) about his life as the first child of German immigrants born in Australia. Stories I felt could be lost forever if I didn’t commit them to paper..now. But the fear was always there. Would I be a good enough writer? Would the family understand? Would anyone be offended? How truthful could I be?

It was then that I read My Place and it struck a chord.

If Sally Morgan could write in a down to earth manner the story of her aboriginal family life and denial of ancestry, well, so could I. With renewed confidence, and after many years, Pickle to Pie was finally born.

Synopsis of Sally Morgan’s My Place. This is a story of a young Aboriginal girl growing up to false heritage and not knowing where she is from. Recounts of several of Morgan’s family members are told. The story setting revolves around Morgan’s own hometown, Perth, Western Australia, and also Corunna Downs. Morgan has four siblings, two brothers and two sisters. She faces many challenges, such as fitting in at school, getting good marks for acceptance in University, and living life without her father.

Looking at the views and experiences of three generations of indigenous Australians, this autobiography unearths political and societal issues contained within Australia’s indigenous culture. Sally Morgan traveled to her grandmother’s birthplace, starting a search for information about her family. She uncovers that she is not white but aborigine–information that was kept a secret because of the stigma of society. This moving account is a classic of Australian literature that finally frees the tongues of the author’s mother and grandmother, allowing them to tell their own stories.

Sally Morgan is an experienced author and photographer. She has written more than 250 titles for both children and adults. Her main interest is in the natural world and environmental issues, but she writes on all science and geography topics. A former teacher and chief examiner for A level biology, she is now a full time writer, When not writing, she helps out on her organic farm in Somerset.

A Wintry Sunday in Melbourne

A dull overcast sky, drops of rain and wind straight off the glaciers of Antarctica didn’t stop me from catching a train for the hour trip from Carrum to Melbourne. Arriving at Flinders Street station I caught a tram to Melbourne University and walked to the La Mama Courthouse Theater in Carlton, Victoria Australia. 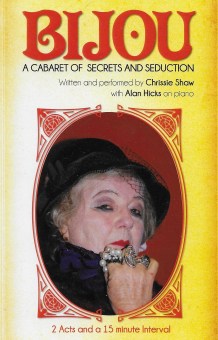 Tucked in my pocket was a Mother’s Day present from Jason, Karen, Tahlia and Caxton. Two tickets to see the 4pm Sunday performance of Bijou: A Cabaret of Secrets and Seduction. A one woman play by Chrissie Shaw set in a French cabaret after world war two.Kathy, myself and others sat in chairs around small tables on which, strategically placed was a candle, a half filled glass with an obvious lipstick stain and some feathers on a stand. Tiered seats rose behind us but we were part of the performance, a cabaret audience on the floor-level stage.

We are in a cafe-bar in Paris 1933. A wine, a chat, the music plays…Chrissie Shaw enters from a side door and instantly command our attention. She is a ravaged figure in faded finery and fake pearls. The evening takes an unexpected turn. Madame Bijou, former queen of the Demi-Monde, (the term refers to a group of people who live hedonistic lifestyles, usually in a flagrant and conspicuous manner) unleashes a string of intimate, colourful memories, taking us backwards in time to the shadows of her youth

This intriguing cabaret gave us a glimpse into the private, sensual world of a riveting ageing Parisienne who tells her life stories of seduction, survival and revealing intrigues accompanied by music and songs by Satie, Weill, Hollander, Bruant and others sensitively accompanied on the piano by Alan Hicks. The songs introduce the year and set the scene for for the aging Madam Bijou’s memories and stories.

We came away having run a gauntlet of emotions from dismay at the tragic revelation that, as a child, Bijou witnessed the death of her father, sadness for the loss of innocence when she was groomed and seduced at fifteen by a person in a position of trust, laughter at the silliness of her many conquests, and amazement at how she survived in France during and after war had ravaged the country and the world.

La Mama is a favourite haunt of mine and I’ve seen many community plays written and produced by Ray Mooney of Holmesglen TAFE play writing class. The theatre is nationally and internationally acknowledged as a crucible for cutting edge contemporary theatre since 1967. Valued by artists and audiences alike, La Mama is treasured for its continued advocacy of those seeking to explore beyond mainstream theatre.  A not-for- profit association it is essentially a playwright’s theatre, a place where new ideas, new ways of expression can be tried out, a place where you can hear what people are thinking and feeling.

We had dinner in an old Italian restaurant and I could not resist recounting tales of times spent in Lygon Street Carlton during my Masters Degree days at Melbourne Uni. It was so much fun to revisit old haunts, such as book shops, coffee shops and devour a steaming bowl of pasta with a glass of red on a cold wintry night when our breath fogged the windows.

It does the heart and soul good to take a holiday and visit the theatre for an evening of make believe.