This quote from Robert Burns’ poem “To a Mouse” certainly applies to me. I make plans, constantly, but so often life intervenes. However, I am back in the land of the living with my email address finally restored (after a week of tearing my hair out negotiating with #Telstra) and my book contract with MadeGlobal on the way. Fantastic!!!  I can’t wait to get ‘Something Missing’ up and running. No wonder this blog is a tad late. However, I tend to believe that it is better to be late than never.

The submissions editor at Madeglobal, while we could still email each other, sent me a link to the Winifred Knights exhibition at the  Dulwich Picture Gallery in London. After seeing the paintings online I immediately wanted to fly to London to experience this exhibition in all its glory. However, airfares to London are far too expensive for a brown rice writer in Australia. At least these works of art are available to everyone via the internet. Reading Winifred Knights’  biography instantly reminded me of Clarice Beckett. Both women artists died in their forties and both struggled for their art to be recognised within a male dominated society.

English born Winifred Knights and Australian, Clarice Beckett are two amazing artists. Their obvious talents as painters was often overlooked during their lifetime.

The overall patriarchal opinion of the period appears to have been that there had never been a great woman artist and there never would be because women had not the capacity to be alone (seen as the key to creative living and central to having an authentic inner life).

Both Knights and Beckett were continually put down by the critics and sold little during their all too brief lifetime.

Winifred Margaret Knights (1899–1947) was a British painter. Amongst her most notable works are The Marriage at Cana produced for the British School at Rome, which is now in the Museum of New Zealand Te Papa Tongarewa and her winning Rome Scholarship entry The Deluge which is now held by Tate Britain. Winifred Knights’ style was much influenced by the Italian Quattrocento and she was one of several British artists who participated in a revival of religious imagery in the 1920s, while retaining some elements of a modernist style. (Wikipedia) In 1914-16 she took lessons in drawing from Frederick McCubbin at the Melbourne Gallery School but then chose to study under Max Meldrum. Constantly encouraging, though often fiercely critical, Meldrum regarded Clarice as a very gifted artist. Clarice Beckett’s personal life remains something of an enigma; her dedication to her art, and her refusal of several marriage proposals pitted her against her family’s traditional view of a woman’s role in society.

She was twenty-seven years old when she finally attended art school; her father refused to allow her to set up a studio in the family home, where, as an unmarried woman, she remained all her life, and thus bore the full load of caring for her ill and ageing parents. Beckett’s bleak domestic life was compounded by the hostility of art critics, and at times, her own peers, who misunderstood her distinctive approach. Despite these circumstances Clarice Beckett was driven to be an artist, and each day at dawn and dusk she could be seen in the suburban streets around her home; most often on Beaumaris Beach, paintbrush in hand, absorbed in her painting. She managed to exhibit her work annually over a ten year period. Clarice exhibited usually with Max Meldrum’s other students, however, very few of her paintings were sold in her lifetime.

Nearly forty years after Beckett’s death, around two thousand of her artworks were discovered in a shed on a property in rural Victoria. Many of these paintings were rotted and torn, and unable to be identified or restored. Rosalind Hollinrake, who is a curator, former gallery owner, and Beckett’s biographer, helped salvage the artworks, and began to piece together the life and work of one of Australia’s most unique landscape artists.

Today Clarice Beckett’s posthumous reputation grows as her vision of modern urban and coastal Australia is acknowledged  by contemporary painters, with her works now held in over four of the country’s major public galleries. I saw an exhibition of her work at the McCallum Gallery , Langwarren Victoria. Amazingly evocative work. Loved it. 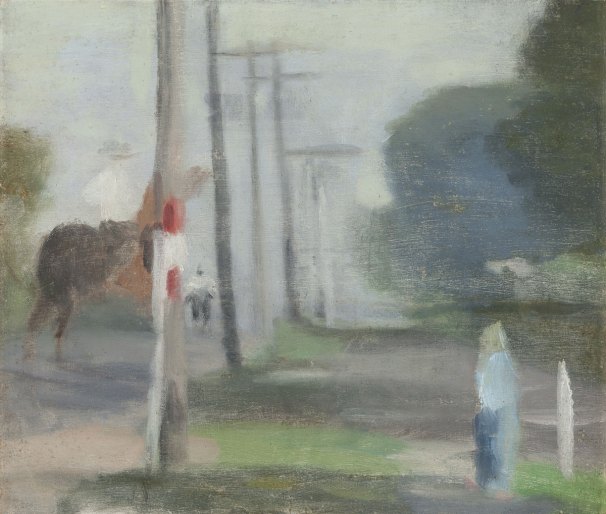 While painting the wild sea off Beaumaris during a big storm in 1935, Beckett developed pneumonia and died four days later in a hospital at Sandringham[5] She was buried in the Cheltenham Memorial Park. She was only 48 when she died, the year after her mother’s death.

Currently I live fifteen minutes away from where Clarice Beckett died. When my city bound train approaches Cheltenham Station I glance out the window and gaze at the neat rows of headstones of what I have always called the Cheltenham Cemetery. In future I will always wonder which headstone belongs to Clarice Beckett.

I am passionate about recording the stories of women. There are so many stories of amazing women yet to be told because,

‘Behind every great man is a woman rolling her eyes’.

My second novel, ‘Something Missing’ is about two women in two countries (Australia and America). It’s based on my thirty-five year  pen-friendship with and older American poet from USA. In 1975 we met when camping in Outback Australia. It is a story for women and about women, growing up, growing old, of love, lies and reconciliation.