The Mary River region is Jawoyn land and I want to know more about the indigenous culture, but first we settled in to the Mary River Wilderness Retreat.

I was delighted to find that we had our own unit with shared pool (a necessity in this hot climate). The water of the pool was not heated and was gloriously cool. I couldn’t wait to don my bathers and swim under the shade of tall palms. So refreshing. Even Alan had a dip in the pool. We had sunshine everyday with azure blue skies. Amazing for the end of the wet season. Our time in the Top End was on the cusp of the wet and dry seasons when trips and accommodation were beginning to reopen for the dry season ahead.

On the way to Mary River we called in to Howard Springs. 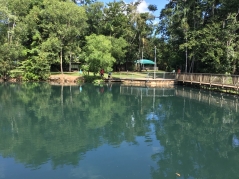 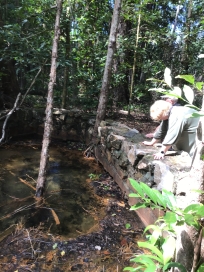 We hardly recognised it after so many years and Paul wheeled Alan everywhere so he could participate in the beauty and history of this place.  Fish were bountiful and the large lizards were amazing to see. We even saw the original spring bubbling out of rocks.

We also called in to Fogg dam. Alan remembered walking over the dam wall in 1973 and seeing crocodiles. This amazing place also triggered many memories for me. We laughed at how it was believed at that time that rice would be a lucrative crop to grow at Fogg Dam.  Acres were planted until the Magpie geese discovered it was a free banquet and stripped the plants bare.

We also viewed wildlife at the Wetland complex and spotted crocodiles in the water’s edge at the South Alligator River. I shuddered when I thought about how little crocodiles figured into our plans so long ago. I now realize how lucky we were to return with two healthy boys able to grow into the caring men they are today.  After my swim we settled in to our unit at the Wilderness Retreat. The next day we went on the experience of a life time:

A Wildlands Wetlands Safari in an air boat over the corroboree billabong. 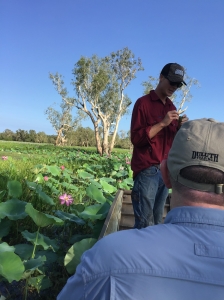 Josh took the four of us on the first trip for the season and was amazing. He revealed to us the indigenous culture of that part of the world. Josh showed us the differences between the native water-lilies and the ancient introduced Asian water-lilies. He demonstrated how the stalks were like celery and the large leaves with their hairy surfaces could be used as water containers or even hats. Alan had to try one and said it was much cooler and protected his head from the sun.

I was amazed that something so decorative could have so many indigenous uses. We had to wear headphones to block out the noise of the air bus engines.

When josh opened up the motor and whipped over the water-lilies it was a thrill of a lifetime. How reassuring that an air-boat doesn’t do any environmental damage. This made our trip all the more fun. 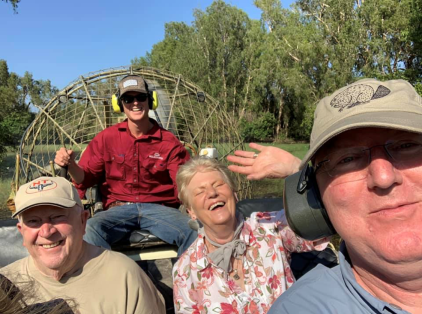 Josh’s commentary was superb as he pointed out Jabiru birds,  and crocodiles that made the billabong home. I loved learning about the birds, animals and indigenous culture associated with this magical Top End of Australia. 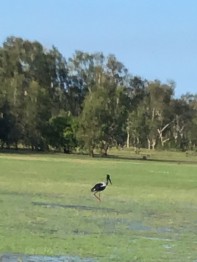 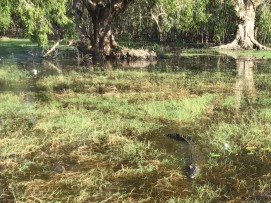 Jumping crocodiles trips are constantly advertised. We even saw an advertisement of a boxing crocodile. I did not want to see crocodiles jumping out of the water to grab a chicken. I wanted to see them lazily powering along with only their eyes and spine visible in the water. This environmentally friendly air boat trip was amazing.

We went back to the Wilderness Retreat ready for a swim and to relax in our unit. Later, we sat outside protected by Paul and Marian’s mosquito coils and wipes and listened to cockatoos roosting for the night. 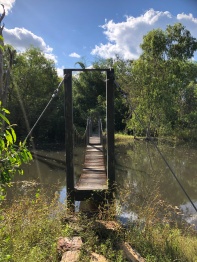 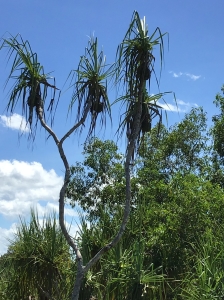 The next day Paul took us around in the hired golf cart. We had a plan in place that if anyone got sick we could easily fly home. However we happily headed off to out accommodation in the Crocodile Hotel at Jabiru/Kakadu