Darwin Hop on Hop off bus

I found the best way to explore Darwin was to pay for 24 hours on the double-decker Hop on Hop off red bus. 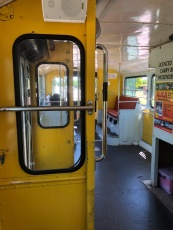 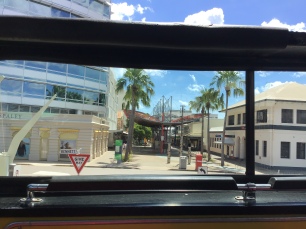 I used it three times before my ticket ran out. 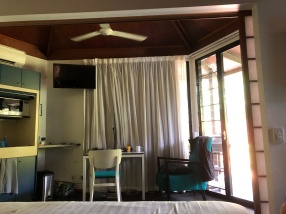 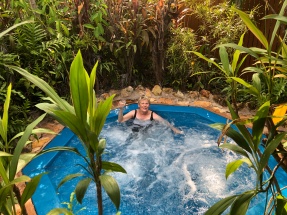 Just around from the Palm City Resort was the Information Centre where we caught the morning bus. The first time Alan and I stayed on board and enjoyed the unique and informative  Northern Territory style commentary. I made notes of the museums and art Galleries I wanted to visit . 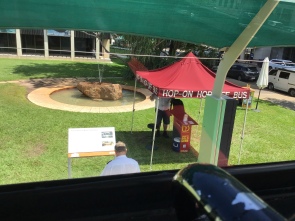 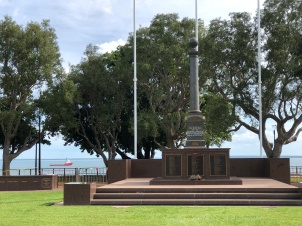 Paul picked Alan up in the hired Mitsubishi Sportsman SUV diesel car. I didn’t realize that the bus didn’t run until 1.30 pm in the afternoon but it gave me the opportunity to shop. Once on the bus I hopped off at East Point to explore the Darwin Military Museum, an important location during WWII. The Defense of Darwin Experience provided me with an immersive, interactive experience of the  story of Darwin’s role during the war . 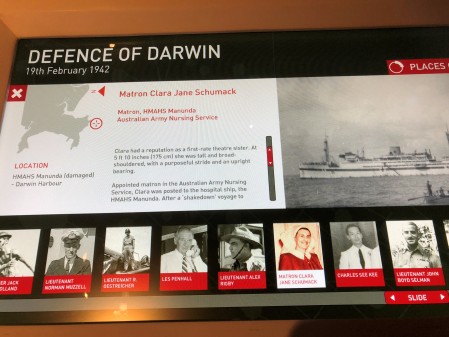 However, I lost track of time wandering around the beautiful tropical gardens containing a myriad of artefacts. (walk through the cafe and out into the gardens. I nearly missed it). I climbed up steep steps to see the guns that were considered obsolete by 1943 and remembered when we came in 1973 we had not realized the extent of the bombing of Darwin. We were amazed at our ignorance and applauded what we saw then as the ingenuity of homemade guns created out of logs and large wheels and the non-government funded museum. Little did we know that for generations the country was kept in the dark about the true dimensions of the Japanese attack. At the time Mr Curtin suppressed all news about the bombing of Darwin in case it caused ‘anxiety and distress’. 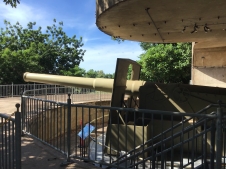 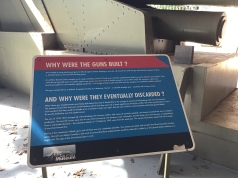 At 9.58am on February 19, 1942, just four days after the supposedly impregnable British garrison in Singapore collapsed, Japanese bombers escorted by Zero fighters appeared in the skies above Darwin. The first wave attacked the CBD and harbour infrastructure, and sank 11 ships either at anchor or berthed. A second wave came for the RAAF base. By noon, 243 people – including 53 civilians – were dead, 400 wounded. The wharf was cut in two, 30 aircraft were destroyed and the post office levelled; postmaster Hurtle Bald, his wife Alice, daughter Iris and six post office workers died when a bomb hit their slit trench. 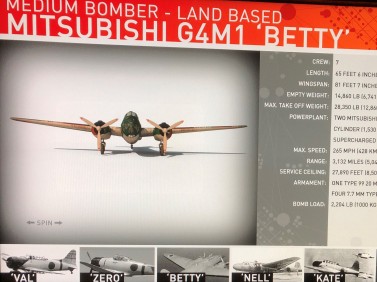 In 2019 the bombing of Darwin in 1943 is now celebrated. Darwin had survived. Sitting in the Museum reminded me  of the 1941 attack on Pearl Harbour, although many more American lives were lost in that conflict. More than 2,400 Americans died in the attack, including civilians, and another 1,000 people were wounded. Darwin was bombed over twenty times and many lives were lost but these facts were hidden from the population at the time. People lived in ignorant bliss unless you lived in Darwin or Adelaide River in the Northern Territory during WWII. 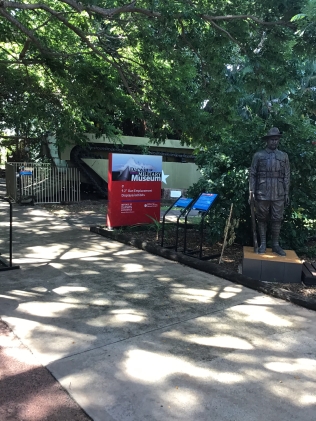 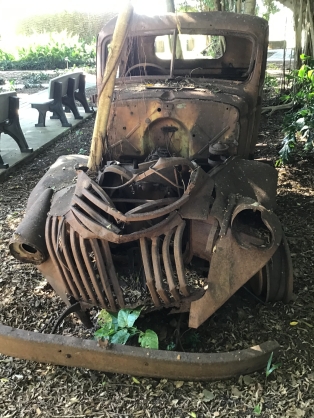 I spent so long there that I caught the last Hop on Hop off bus to the Flying Doctor Museum at Stokes Hill Wharf. I was determined and excited by the thought of trying virtual reality for the first time and to see the Holographs used to accentuate the visitor experience 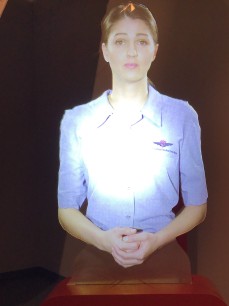 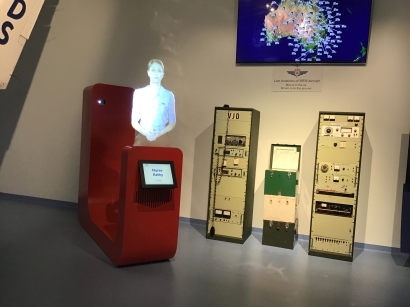 Racing through the exhibit in the hour before they closed I had to ring Paul to pick me up. Fortunately he was available and knew where to get me. He and Marian had taken us to have a delicious dinner on the wharf the night before. We had a round table between two wharf-side buildings where we got the evening breeze, so cooling after Darwin heat. We ordered our green Thai curry meal from a wharf cafe. Delicious. 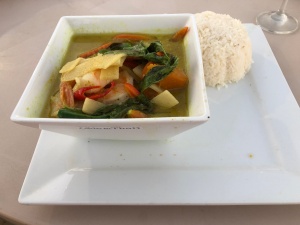 I was up and on the bus early the next morning because I wanted to experience the Northern Territory Museum and Art Gallery. Of particular importance to me was to see the Cyclone Tracy exhibit. We had been there the year before Tracy but I remember reading about the devastation and disbelief of Darwin residents that this could happen to them on Christmas Eve 1974. Having two small boys myself at the time I could truly empathise and relate to their problems.  they couldn’t reveal the actual wind speed of the cyclone as all the gauges were destroyed 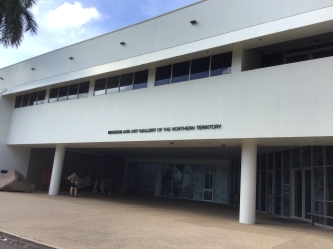 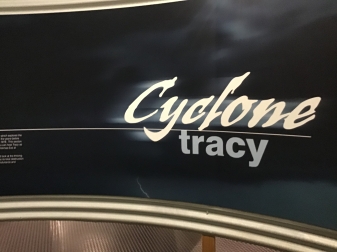 I arrived at stop 7 ready for action only to find the NT Museum didn’t open until 10am. I only had half an hour to dash into the Gallery, take as many photos as possible for later research and dash out again, but at least I had seen it for myself. 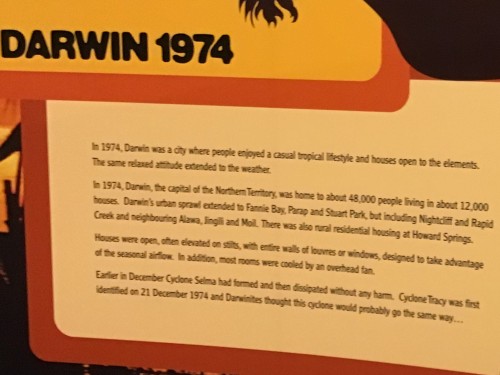 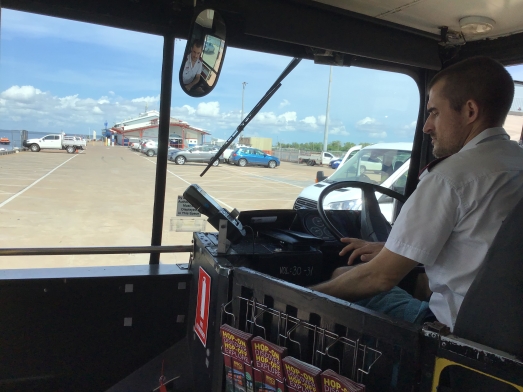 We finished our three days in Darwin with a trip to Coles (just around the corner) for travelling supplies and later a sunset cruise and buffet meal on a catamaran . 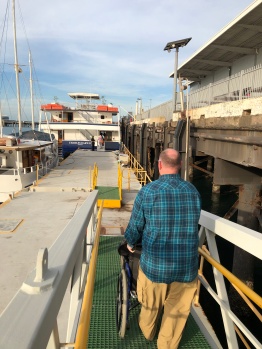 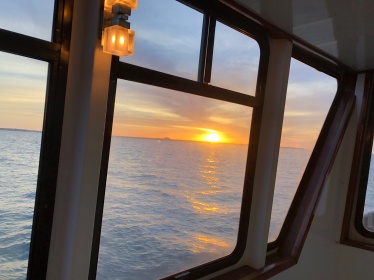 The next day we left Darwin to head for Mary River Wilderness Retreat. The Mary River region is Jawoyn land and I want to know more about the indigenous culture

This entry was posted in Uncategorized. Bookmark the permalink.

2 responses to “Darwin Hop on Hop off bus”