Wendy J Dunn: The Light in the Labyrinth

I am delighted to be able to showcase the inspiring books and successful career of my long time writing friend and colleague, Wendy Dunn.

Wendy J. Dunn is an Australian writer who has been obsessed by Anne Boleyn and Tudor History since she was ten-years-old. Born in Melbourne,  Australia, Wendy is married and the mother of three sons and one daughter. Her fabulous author website is well worth a visit . 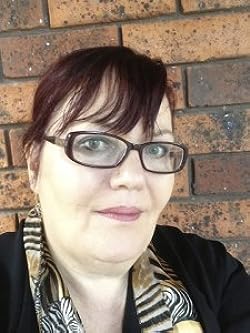 While Wendy continues to have a very close and spooky relationship with Sir Thomas Wyatt, she no longer wonders if she has been channeling Anne Boleyn and Sir Tom for years in her writing, but instead is considering the possibility of ancestral memory. Her own family tree reveals the intriguing fact that her ancestors – possibly over three generations – had purchased land from both the Boleyn and Wyatt families to build up their own holdings. It seems very likely Wendy’s ancestors knew the Wyatts and Boleyns personally. 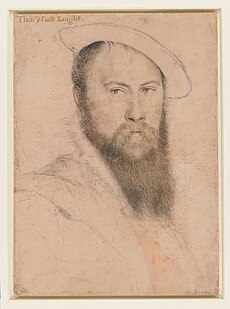 Wendy tutors at Swinburne University in their Master of Arts (Writing) program. She also works as a literature support teacher at a primary school. Her credentials are inspiring. She has a BA Dip Ed Grad Dip MA and PhD in Creative Writing

THE LIGHT IN THE LABYRINTH 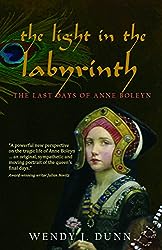 A Queen fights for her life.

A King denies his heart and soul.

A girl faces her true identity.

All things must come to an end—all things but love.

“…The Light in the Labyrinth is quite the read – no matter the age of the reader. And yes, thanks to Kate, a new voice has been added to the well-known haunting melody – a voice that mellows and matures as the story evolves and yet retains a touch of bittersweet innocence right to the bloody, inevitable end.” – Anna

IN THE WINTER OF 1535, fourteen-year-old Kate Carey wants to escape her family home. She thinks her life will be so much better with Anne Boleyn, Henry VIII’s second wife and the aunt she idolises. Little does Kate know that by going to attend Anne Boleyn she will discover love and a secret that will shake the very foundations of her identity. An attendant to Anne Boleyn, Kate is also swept up in events that see her witness her aunt’s darkest days. By the time winter ends, Kate will be changed forever.

At Amazon.com I was delighted to see that The Light in the Labyrinth had 52 customer reviews. The most interesting was a review by Anna B
An Extract of  Anna’s Review
When The Light in the Labyrinth landed on my desk, I was somewhat hesitant. Yet another book about Anne Boleyn, this enigmatic lady who so enthralled the king that he broke with the Holy Church for her sake – what new insights could possibly be offered? One chapter into the book, I no longer cared about new insights. I cared about prickly, confused Kate, Anne Boleyn’s fourteen-year-old niece.Katherine Carey is a resentful, angry young girl. She considers her mother a fool for marrying beneath her, she is jealous of her new half-siblings, condescending of her commoner step-father and the only thing little Kate wants is to go to court and serve her adored aunt, Queen Anne. In Kate’s book, Anne is everything her own mother is not: fashionable, witty, powerful – and of course, extraordinarily happy, now that she has achieved her ambitions and become queen.

Kate’s mother, Mary, does not want her to go to court, but at long last she relents, even if her demeanour clearly shows Kate just how much her mother hates letting her go – or is it fear that causes her mother’s face to pale? Kate doesn’t care. She is going to London, to live with the queen and to finally see her brother, Harry, who for the last few years has lived at court, despite being younger than Kate. She vaguely recalls her mother’s distress when Harry was taken from her – several years ago – to be brought up elsewhere, and she doesn’t quite understand why her brother was so brutally separated from his family, but conveniently blames her mother for it. In Kate’s opinion, everything is her mother’s fault – a typical adolescent reaction.

It is rather fitting that Kate enters London via London Bridge, having to ride below the garish display of the rotting heads of the king’s executed enemies. She is entering a dark world, a labyrinth of conspiracies and undercurrents, and very soon Kate’s entire universe will be severely rocked as she uncovers secrets about herself – and about the court. Even worse, it does not take Kate long to understand that her beloved aunt is far from happy. In fact, Queen Anne is distraught, living her days on a knife-edge of fear and hope – hope that she might yet give the king a son, fear of what he’ll do if she doesn’t.

While it is Anne Boleyn’s subsequent fall from grace that is the main theme of the book, this is really the story of how Kate grows from a truculent difficult child to a very young woman of integrity and courage – brave enough to confront the king, mature enough to see in him a confused and angry man who no longer knows who to trust.

In Kate, Ms Dunn gives us a complex and credible character, one it is easy to love and care for, despite her initial despicable behaviour towards her mother and step-father. Forced by circumstances to take on far more responsibility than she is ready for, Kate more than rises to the challenge, even in those moments when all she experiences is suffocating fear. The story is told in third person, consistently from Kate’s perspective, but here and there the author has inserted Kate’s own thoughts, taken from her secret journal, and these first person passages add depth to Kate’s personality.

Had The Light in the Labyrinth only dealt with Queen Anne’s unhappy end, it would have made for quite the dreary read, no matter how much life Ms Dunn blows into her cast of characters. Fortunately, she has added a sweet and innocent romance between Kate and her future husband Francis. All that teenager angst that goes in hand in hand with first love is excellently depicted – and quite, quite timeless, causing this reader to smile in recognition.

Ms Dunn has obviously expended a lot of effort on her research. It shines through every casual description of rooms and gardens, clothes and pastimes. A myriad of characters populate these pages, but Ms Dunn does a good job of only properly introducing the truly important, while the rest blend into the colourful background of scheming courtiers and invisible servants. Even more important – and especially in a book aimed at a YA audience – all this information is expertly woven into the fabric of the tale, thereby avoiding any heavy-handed “info-dumps”.

All in all, The Light in the Labyrinth is quite the read – no matter the age of the reader. And yes, thanks to Kate, a new voice has been added to the well-known haunting melody – a voice that mellows and matures as the story evolves and yet retains a touch of bitter-sweet innocence right to the bloody, inevitable end. It is with regret I close the covers on Kate’s story, and I can but doff my cap and applaud Ms Dunn for a work most well done!

A woman who sees her destiny as England‘s Queen.

A King who destroys what he no longer wants.

A poet’s love that will never be forgotten.

May, 1536. The poet Sir Thomas Wyatt, released from imprisonment in the Tower of London, is in his father’s custody. From almost the beginning of his life, Tom has loved his cousin Anne Boleyn, content to sit at her feet while she sang her love songs to another, if doing so gave him just a moment in her company. Now he is heartsick and despairing, having witnessed her juridical murder by Henry VIII. Only wanting to escape from the recent memories now rending his heart, Tom recounts his story, a story which narrates too the tragic tale of Anne Boleyn, second wife of Henry VIII.

~ “Seriously one of the best books
ever written about Anne Boleyn.”

I know that Wendy is currently writing her third book and I can’t wait to read it. I wish her every success in her writing career